Mr. Keenan, a partner at Shook, Hardy & Bacon LLP based in Kansas City previously served as chair of the firm's Pro Bono Committee for eight years and on the board of Legal Aid of Western Missouri. He was a columnist for the Kansas City Star for seventeen years.

Chief Justice Roberts noted that it is “an extraordinarily appropriate day in this appropriate place” for the ceremony, because 52 years ago on this date Thurgood Marshall was sworn in as an Associate Justice, becoming the court’s first African-American Justice.

LSC is the single largest provider of civil legal assistance for low income people in the nation. It is headed by an 11-member Board of Directors appointed by the President and confirmed by the Senate. By law, the board is bipartisan: no more than six members may be of the same political party. 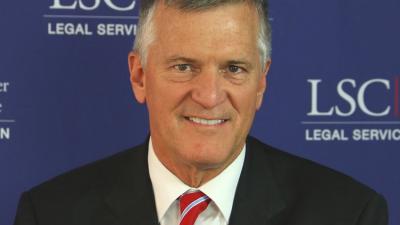