Adoption is the legal process which establishes a parent/child relationship between two people who are not otherwise biologically parent and child.

Who is involved in an adoption

What is required to adopt a child or children?

The parents who wish to adopt the child or children must file a petition with the family court in one of the following locations:

1.  Where the parents seeking to adopt live;

3.  Where the child is living at the time of seeking the adoption; or

4.  Where either of the birth parents live

Who can seek to adopt a child?

Either a married couple or single person may petition to adopt. Missouri law requires the person or people seeking to adopt be of good moral character and be able to care for, maintain and educate the child.

Who may place child for adoption?

The parents of the child, the State of Missouri through Children’s Division, a licensed adoption agency, an attorney, physician or clergyman can all place a child for adoption.

However, before the custody of the child can actually change, the court must approve the change in custody.

What must be done before an adoption can be approved?

Missouri requires an investigation by licensed social worker for both the adoptive parents and the biological parents, commonly known as a Home Study. Courts are able to waive the requirement of a Home Study. Waiver of the home study is common where the child is being adopted by a step-parent and the other parent is a birth parent.

What can adoptive parents pay to the biological parents?

Adoptive parents must be cautious in what they pay to the biological parents when adopting a child. Missouri allows adoptive parents to pay for medical expenses in connection with birth or illness of child, counseling for the child or parent, placement studies, legal expenses related to the adoption, reasonable living expenses and anything else the court finds reasonable necessary.

Anything paid to the biological parents must be reported to the court.

What is the process to adopt a child?

The adoptive parents must have written consent of the biological parents, except in certain circumstances, including:

3.  ID is unknown and cannot be found

4.  Permanent and incurable mental condition which renders the parent unable to provide for the child

5.  A man who has not established to be the father and denies paternity

6.  When a man has been established to be the father but who for a period of six months has abandoned or neglected the child who is one year of age or older (60 days for children under 1 year)

7.  If child being adopted is 14 or older, the child must give written consent

Once custody has been transferred, a home study will be conducted. The actual adoption cannot be finalized until after six months in most cases.

What happens once the adoption is final?

Once the adoption is final, the Circuit Clerk sends a Certificate of Decree of Adoption to the Bureau of Vital Statistics, listing the adoptive parents as the parents of the child.

Any rights and relations between the child and the birth parents are terminated and there will be no right to inherit in the future from the biological parents. 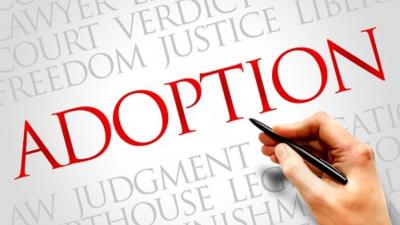